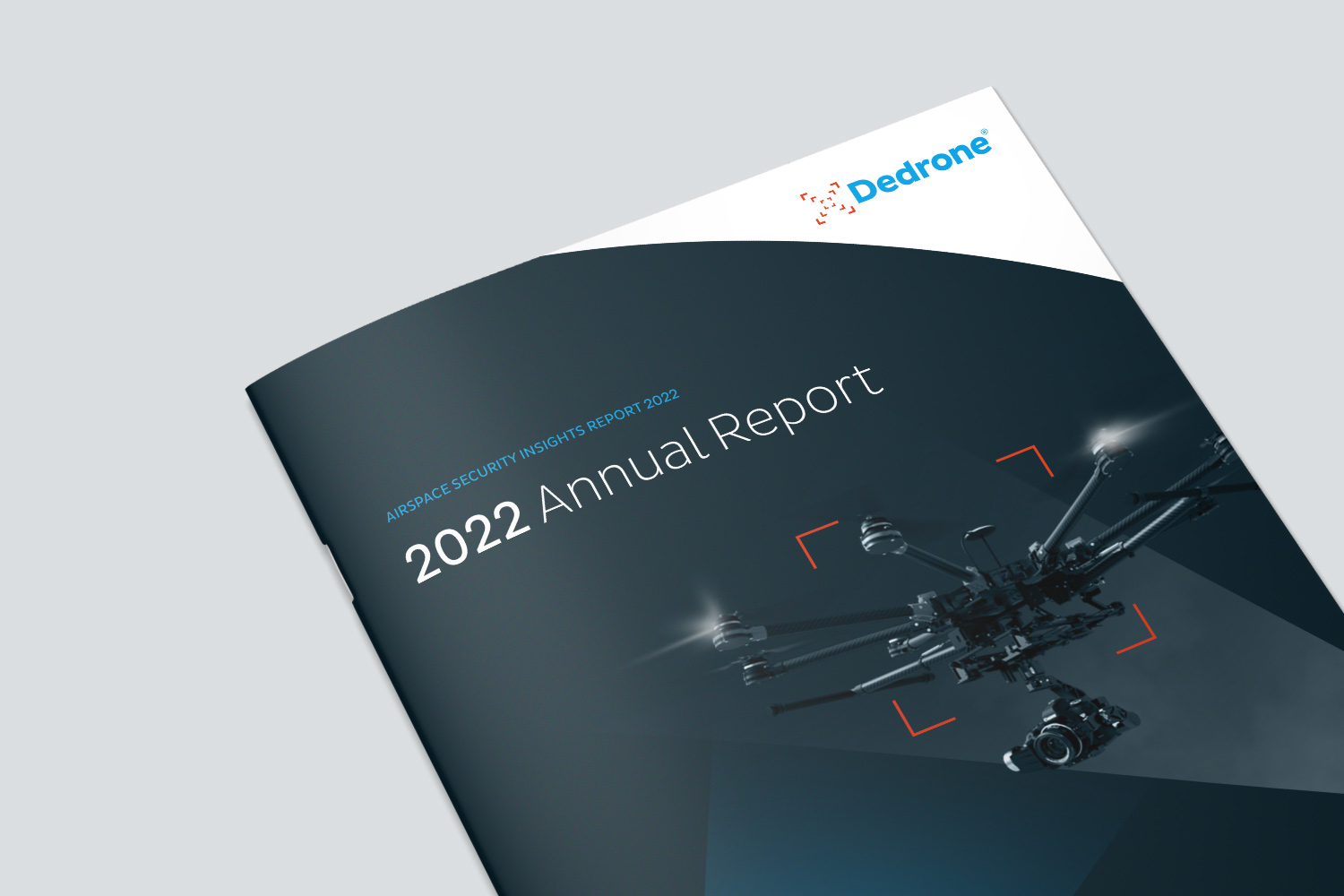 Security teams protect people, property, or information. Now they also need to look up, to ensure their airspace is clear from drone threats.

Drone incidents around the world are only increasing in number, even being used as terrorist weapons abroad and in the U.S. As more productive drones enter our airspace, accelerated by COVID-19 shutdowns, security leaders are taking steps to integrate counter-drone solutions into their security infrastructure. This technology enables them to differentiate between cooperative and uncooperative drone activity and prevent physical or cybersecurity breaches to protect operational continuity.

Over the course of 2022, the drone industry will mature unmanned air traffic management programs, including Remote ID, showing security providers the nature of authorized, cooperative drone activity in their area. Progressive cities will integrate drone detection and identification into their overall security infrastructure–managed locally as a utility through city government and/or law enforcement and provided as-a-service to local organizations.

This report covers the following industries

The reader will learn

Airports are continuing to recover from COVID-19 slowdowns and shifting their focus to emerging threats. In fact, the U.S Federal Aviation Administration’s (FAA’s) records show a 74% increase in visual drone sightings at US airports from 2020 to 2021. Equally, proprietary Dedrone data from airports around the world, protected by Dedrone show:

In 2021, the FAA launched the Airport Unmanned Aircraft Systems Detection and Mitigation Research Program, a program to test counter-drone technology at five U.S.

international airports. The ultimate objective of the program is to make airports safer for passengers and manned aircraft from drone threats. Additionally, in 2021, INTERPOL carried out full-scale drone countermeasure exercise at Oslo International Airport that Dedrone was invited to participate in.

In October 2021, The National Counterterrorism Center (NCC) inside the U.S. Department of Homeland Security (DHS) with the Federal Bureau of Investigation, (FBI) jointly revealed the first known case of a drone-based terrorist attack on U.S. soil. The incident was made public in November 2021 to heighten local authorities’ awareness of this vulnerability, but it actually occurred in July 2020. It was a modified drone, designed to evade detection and disrupt Pennsylvania’s electrical grid. Drones will continue to show up at critical sites, such as a swarm of mysterious drones found at Palo Verde Nuclear Power Plant, or a crash into energy facilities, including a power plant in New York City.

Critical infrastructure sites, including chemical, communications, energy and nuclear facilities must be protected from drone threats. A drone attack, like the one in Pennsylvania, may incapacitate or destroy a critical site, causing debilitating effects on security, national economic security, national public health, and safety.

Forward thinking cities are embracing the integration of drones for productive uses including deliveries, inspections, and public safety, while also considering how to manage drone traffic and differentiate between authorized and unauthorized or even malicious drones. Public safety is the highest priority for law enforcement, and smart airspace security systems allow local governments and law enforcement to comprehensively monitor their airspace for all drone activity, including higher risk areas like critical infrastructure sites, airports, events and high-traffic pedestrian areas.

Around the world, correctional facilities continue to report on drones dropping contraband – an issue that has persisted and escalated since consumer drones became available almost 15 years ago. Across prisons, Dedrone proprietary data shows a 217% increase in drone sightings from precovid times. Canadian prisons report almost daily drone deliveries of contraband and in the U.S. headlines continue to be flooded with reports of drones at prisons – including a prison-bound drone with dangerous contraband crashing into a school yard. Tobacco, phones, drugs, and weapons are regularly dropped by drones into prisons, causing severe disruption to operations and threatening the safety of inmates and officers.

Spectators are excited to be back, following the historic international shutdown of in-person events. As venue and public security teams continue to adapt to new health and safety protocols stemming from the COVID-19 pandemic, another rising security concern has emerged – the risk of drones.

Drone disruptions at stadiums are not new, but more people realize how easy it is to cause damage to a stadium full of fans, and how harmful these drone events could be to operational continuity. Just imagine a drone dropping a white powdery substance into a full arena – even talcum powder could cause mass panic and injuries. Additionally, drones may play just a small part of a broader exploitation plan: they could be used for surveillance to assess the site for vulnerabilities before entering, or even spy on team practices to gain the competitive advantage.

The counter-drone industry is at the forefront of emerging airspace threats. Small and mid-sized drones are accessible, easy to deploy, and thus an easy vector for nefarious activity including hostile surveillance, weapons delivery and even detonation. For example, the recent assassination attempt on the Iraqi prime minister. Additionally, military activity in the Middle East related to the 2021 U.S. exit from Afghanistan, has renewed concerns on how to prevent a resurgence of terrorism on U.S. soil or U.S./allied assets around the world.

Military forces may be unprepared for a drone attack today but can now quickly deploy counter-drone programs to protect civilians, civil servants, operations and information from spying drones or drone attacks.

The best anti-drone solution is able to detect, identify and locate drones and their pilots, however, to achieve true airspace security, leaders must go further. Simply implementing a counter-drone technology is not enough to protect people, property and information from drone-based threats. Security managers must recognize that not all drones are “bad”. Identifying “friend” vs. “foe” drone to enable the continued increased productivity delivered by drones while avoiding safety and security breaches. Organizations can take the following steps to ensure safety from above

1. DJI’s market share will continue to erode in the consumer and enterprise market at a faster than expected rate.

VC fueled innovative startups will take significant share (in specific use-cases) and start the process of bending the cost curve to be competitive vs. DJI in a significant way. Dedrone predicts the erosion will be steeper than expected especially with the latest pricing of DJI’s newest drone, the Mavic 3.

2. Drone use-cases in remote areas / states with sparse population will “take off” (pun intended!), be it for logistics or transportation.

Programs like the Vantis in North Dakota will be shining examples for how other states will embrace and prepare for this paradigm shift especially with BVLOS becoming more widely accepted and approved.

3. A U.S. critical infrastructure site (airport or power grid or O&G) will experience a drone-based attack in 2022.

Sounds dramatic but we all know it is only a matter of time. In fact, the first terrorist drone-based attack on U.S. soil has already occurred (recent news reports on the revelation by the FBI about a potential attack on a utility grid in the North East). Next time the attack will be more public and likely more “successful” with potential impact to millions of citizens.

4. Unauthorized drones at prisons is a preventable risk, and 2022 will be a watershed year for the widespread adoption of drone detection technology at prisons.

This expansion of prison security capability will be linked to the creation of standard operating procedures (SOPs) for drone incursions at prisons.

5. The next serious conflict / war in 2022 will be won or lost on drone technology / unmanned aerial supremacy

We have seen these technologies (UAV and counter-UAV) employed for years to come and drones have the potential to become the pivotal 21st century capability that will start setting militaries apart.

6. The widespread adoption of counter-drone technologies by governments will expand.

Both military forces needing defense on the war field and to protect high value government assets to local law enforcement agencies protecting public assets and citizens, the need for counter-drone solutions will soar as drone activity.

7. Governments around the world will initiate grant programs to protect critical infrastructure against drone attacks.

Today, only a handful of smaller FEMA grants exist to support local governments against drone attacks and the recent U.S. Infrastructure bill went more toward repairing 20th century assets than protecting against 21st century threats therefore more monies will be needed to fight this risk.

8. Local law enforcement in conjunction with federal agencies will lead the way to protect cities against drone threats.

A few forward thinking cities will set-up monitored airspace programs to create a protective bubble of airspace security around city cores and their critical sites.

9. Laws against pilots of unauthorized drone use will strengthen.

10. Thee FAA will not declare a standard for drone detection or mitigation in 2022.

In the near future, all cities will inevitably require complete airspace awareness on their drone activity. COVID-19 related shutdowns accelerated use-cases for drones, and with more drones in the skies, come more exposed vulnerabilities. Security teams must have the ability to differentiate between productive and unauthorized or hostile drones in their area.

The world’s most secure organizations rely on smart airspace security for automated, continuous protection of their airspace against unauthorized drones but they do not stop there.

Prevent losses with data-driven and continuously improving, smart airspace security programs. Within a matter of minutes, security providers can install and launch their drone detection solution and begin assessing their airspace activity. With early detection and in-depth data, security teams can now protect operational continuity, prevent losses, and regain control of their airspace.