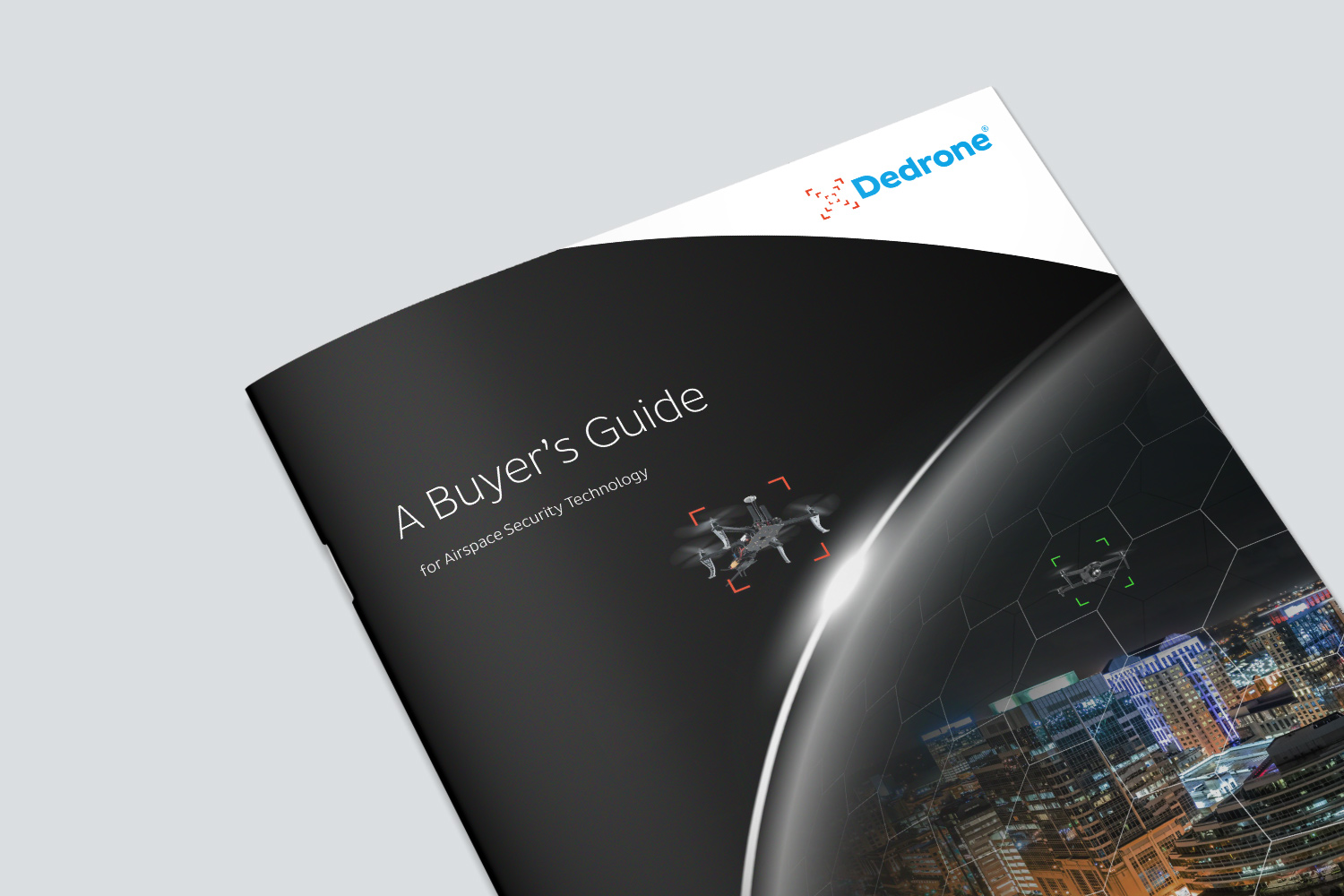 The airspace security industry is growing rapidly, and laws involving the safe integration of drones to national airspace are slow to catch up. As more drone incidents and airspace intrusions are occurring, organizations protecting highrisk and high-value infrastructure must be proactive and protect their airspace from drone threats.

It is important now, more than ever, to understand and assess lower airspace activity and gain situational awareness on drones entering critical airspace.

In this buyer’s guide, you will learn:

Hardware collects data and information about the drone and is installed outside in areas that need to be protected against drone threats.

Software connects sensors, performs machine-learning analysis, and is the central nervous system for the complete solution.

This technology does not collect data about the drone, but is an important component of an airspace security solution. Countermeasures can be passive or active. Detection technology first locates and identifies the flightpath of drone, and then a defeat or countermeasure can be deployed.

With the rise of drones in our airspace, we need to consider building an aerial equivalent of a fence. Some major concerns organizations have include:

What are your current security needs?

Drones pose both physical and cyber security issues. Drones are capable of carrying payloads of any kind, up to hundreds of pounds. Cameras can be used for espionage, and payloads can drop weapons, drugs or other sensitive materials. Drones are also laptops in the sky and can be used by sophisticated hackers to conduct espionage and compromise data centers and IT networks.

Are there unauthorized drones in your airspace?

Situational awareness is difficult to assess without technology. Drones move quickly and can be hard to detect with the naked eye. A dedicated security officer may have limited resources, including visual range, line of sight distractions, such as inclement weather, and even with the best attention span, can easily miss a fast-moving, discrete drone.

Does your organization already have a drone program?

Drones are coming to work across a variety of industries for surveillance, inspection, delivery, and entertainment. It’s important to differentiate between an authorized drone and unauthorized drone so that your operations remain intact and existing drone programs operate safely.

What are your goals?

You may want to catch contraband deliveries, locate snooping trespassers, protect intellectual property, or collect data on your airspace activity to ensure your skies are clear during certain operations. Define what success means for an airspace security system. Some examples could include:

This information will help determine the tools you will need to accomplish your goals.

Inform your team members of your research and their role in the process.

While it’s important that security team members and leaders are fully informed of airspace security threats, it’s also helpful to get your information technology team and facility maintenance team onboard to ensure seamless integration and long-term success.

Airspace security is an emerging market. It’s important to be critical of the technology you purchase and ensure their platform aligns with your needs. Your technology solution needs to be:

Determine your budget and timeline

Based on your threat level, you’ll need to determine how much you can invest in hardware, software licenses, and other purchasing costs. It may be that you need to make a purchase immediately. Determine this early on in the process to make sure your budget matches your needs.

Timing milestones you need to consider include:

Once you start the conversation with a technology company, you can work out these details to ensure the start of a drone detection program is in accordance with your threat level and other needs.

Prepare for the purchasing process

It’s important to go into a conversation with an understanding of your physical landscape and any considerations that may require special installation. While you don’t need this information immediately for the first contact with a provider, it 17 Section 4 | Engaging a Technology Provider will eventually need to be considered to ensure you’re developing a successful program.

Below is a checklist to help you find airspace security technologies. This will help in your conversations with technology providers, who can then help identify and narrow down your solution needs.

Create a list of sensors you need and assign the installation location, the primary function, and the make/ model:

Confirm ahead of time if you have the following technology requirements for a successful deployment:

While some of these may not apply to you, it’s helpful to make a note of the environment that you’re protecting.

Is the Solution a Good Fit for my Facility?

You can get a PDF version of this Buyer's Guide for free here.