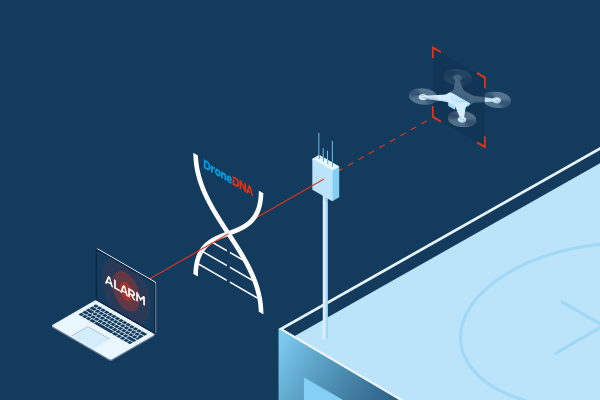 DroneDNA is the fusion of all kind of drone characteristics used in Dedrone's detection system, and recognizes drones of all kinds. Using machine learning techniques, DroneDNA is trained on millions of data points. It can detect the difference between drones and other moving objects such as birds, planes, or other objects, and even distinguish between drone models using radio frequency (RF) sensors, PTZ video cameras, radar, and microphones.

What is a drone signature?

A drone signature is a set of characteristics that classifies a certain drone model, including RF protocols, shape and size. The drone signatures are saved in the DroneDNA database.

Why is DroneDNA so important?

Drones come in various configurations and sizes, with fixed wings or a varying number of rotors. Some even look like birds or insects. Radio frequencies also vary - many drones are controlled using common radio technology like Wi-Fi, but others feature radio systems specifically developed for drones. In the future, there will be more drones that fly autonomously and aren’t remotely controlled by a pilot. All these drones must be detected, and the detection accuracy of sensors relies on known drone signatures. DroneDNA provides specific information on the exact type of drone, helping immensely to reduce the false-positive and false-negative detection rate.

Why does DroneDNA need to be frequently updated?

New drone models with specific characteristics are constantly coming onto the market. Similar to a virus scanner, a counterdrone system must always be set to protect against new types of potential threats.

The crowd sourcing ability for collecting recordings of unknown drones reduces the amount of time required for adding new signatures.

How do customers receive the DroneDNA updates?

Newly recognized drones are automatically added to the DroneDNA signature library and there’s no need to manually install software updates.

How often is the DroneDNA data base updated?

To keep up with the quickly developing drone market we are currently updating the DroneDNA data base every month, but we are able to react faster, if necessary.

How long does it take to add a drone?

Depending on its characteristics, analyzing a drone and building a new signature can take a few days up to a couple of weeks.

How does Dedrone decide which drone to add next?

Dedrone constantly monitors the release of new drones. The order in which drones are added to the database depends on several aspects like the drone’s market presence, its capabilities and on our customers’ feedback.

Thomas Markert is the Drone Analyst at Dedrone.