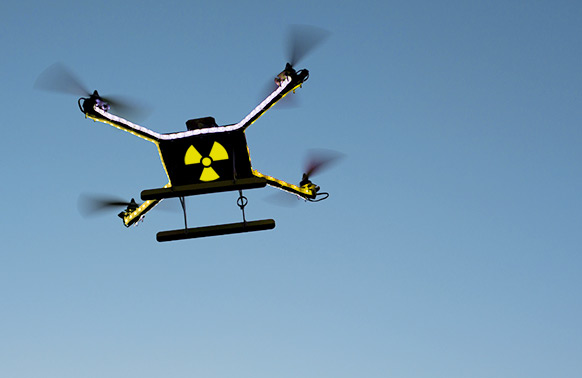 A drone with radioactive material was found on the roof of Japanese premier Shinzo Abe's official residence on April 15, triggering a large-scale police operation.

According to media reports, the aircraft measured about 50 cm across and carried a radioactive hazard symbol, a camera, a plastic bottle and a flare – but no explosives, fortunately. The action may have been a protest against a Japanese court decision to allow a nuclear power station to start up again.

A Sky Full of Drones

As in Japan, non-military drones are becoming increasingly popular in Europe and the USA, too. It was only at the beginning of April that investors put the estimated value of the American leisure-time drone manufacturer DJI at ten billion dollars. According to unofficial statistics, the company's sales of small, unmanned aircraft in 2013 yielded a profit of around 130 million dollars, a figure which is said to have quadrupled since then.

Similar Incidents in Washington and Paris

A DJI hit the headlines in January by crashing on the White House lawn. It turned out that an off-duty secret service employee flying the quadrocopter had lost control of it. The embarrassing incident also revealed a glaring security flaw: the small, unmanned aircraft did not show up on the radar that is supposed to protect the White House from airborne attacks.

Since last fall, there have also been a number of reports about mystery drones in French airspace, mainly around nuclear power stations. Drones have also recently been spotted near an atomic weapons base, as well as the Eiffel Tower and other neuralgic points in Paris.