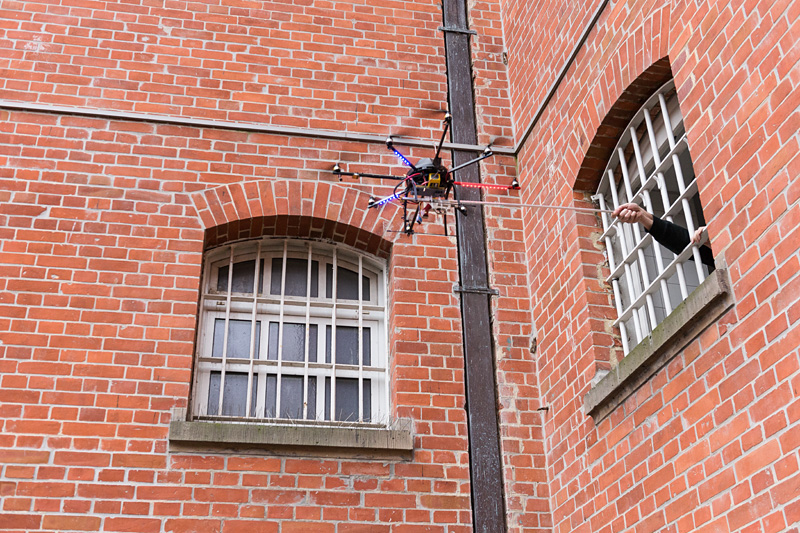 „Drone smuggling at prisons is rocketing as criminal gangs fly in drugs and phones” – this is the headline of an article published earlier this week by the British "Mirror". Thus, the attempts to smuggle contraband into prisons by using drones, have greatly increased in England, especially in the last few weeks. The inmates stock up on goods now in order to generate profits in the holiday season. Since April 2014 28 smuggling attempts with drones have been recovered in prisons in England and Wales – until then there were none."It could also be guns or explosives""For every drone that fails, another nine are believed to get through", writes the Mirror, and quotes a spokesman of the Prison Officers Association: "We know money, phones and drugs are transported in. Our concern is they may soon include guns or explosives."This worst case scenario occurred last Saturday in the most violent prison of the Canadian province Quebec: According to media reports, a drone had dropped a handgun in an area which houses the prison’s convicted mafiosos and biker gang members. It was not until a day later that the officers heard of the illegal delivery and launched a large-scale search. Apparently they could seize the gun in time, at least as otherwise known.

DroneTracker controls the airspace over prisons 24/7

"Prisons should close the security hole in their airspace urgently and ensure 24/7 protection against criminal drones," says Dedrone CEO Jörg Lamprecht. So such as the JVA Halle: Here a DroneTracker monitors the airspace day and night and alerts the security guards once a drone flies over the fence. On the basis of the recorded video evidence, the officers can immediately see to which cell window the drone flew, or where it has dropped the contraband and make a cell entrapment and a search.Also watch these videos to it:Dedrone your prisonWhat drones are capable of