A Primer on Integrating Radar Technology into DroneTracker 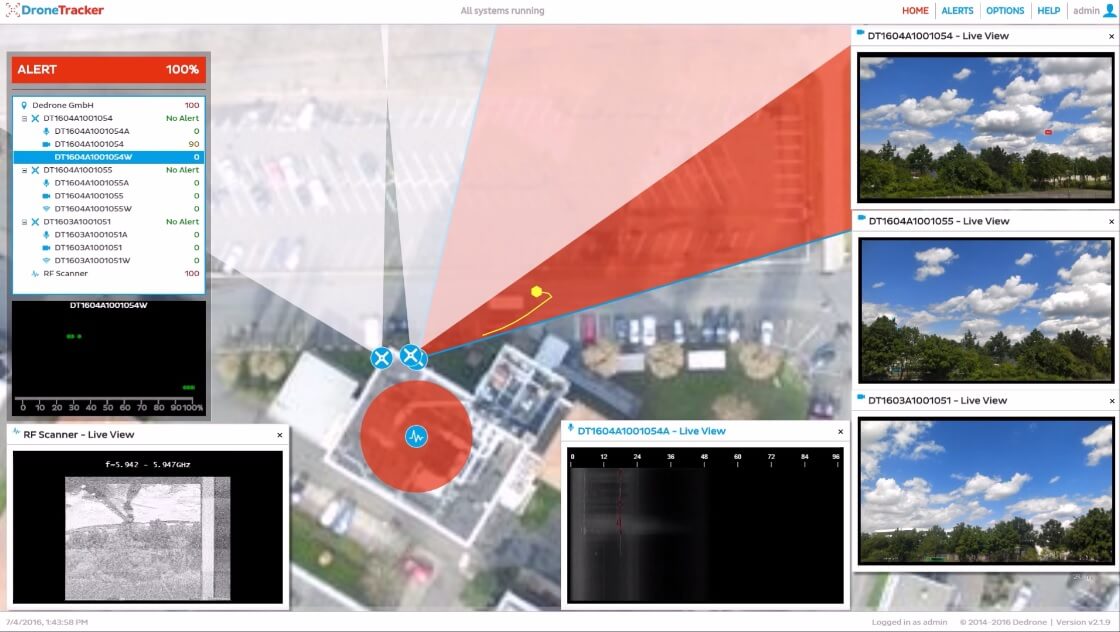 What is radar and how does it detect drones?

Radar is a detection technology that uses radio waves to determine the range, angle, and movement of objects. The term “RADAR” was initially coined by the U.S. Navy as an acronym for “Radio Detection And Ranging,” and is used widely today in both military and civilian spaces, including air traffic control, meteorology, and mapping.

Depending on the type of radar, the technology can determine the following characteristics of a drone or moving object:

With radar, security personnel now have an abundance of drone flight data. Those looking to secure their airspace from drone threats now can take the extra step to integrate DroneTracker into their radar systems to differentiate and identify if the moving object is a drone or other distraction. Dedrone’s DroneTracker aggregates sensor information about potential threats, recognizing and classifying drones of all kinds.

How does DroneTracker use information from radar?

A radar system can detect the latitude, longitude, and height coordinates of moving objects. Once located, DroneTracker begins analyzing the movement.

The extra range provided by a radar enables security providers to begin analyzing drone movement at the maximum distance technologically possible with any detection sensor. Radar also gives the user extra accuracy in positioning, including longitude, latitude, and altitude. Many defeat technologies require the height of the drone in order to precisely take it out of the air.

If standing alone, radar will pick up any movement, whether it be a bird, debris, moving traffic, airplanes or drones. Once DroneTracker determines if the movement from radar is a drone, it can learn from that movement and begin eliminating other detected objects, which are considered false positives.

Can radar be used with other detection sensors?

Detection sensors like cameras, microphones and RF/Wifi each provide different levels of information. Radar detects drones at a longer distance, but as it also picks up other objects, it’s important to have other sensors to eliminate distractions and only focus on drone activity.

When the drone approaches and becomes in the range of radar and other sensors incorporated in the installation, DroneTracker determines more identifying information, such as the type of drone, flight path, and location of the pilot.

Why would someone use radar over other drone detection sensors?

Radar extends the distance which DroneTracker can begin analyzing drone movement and increase the accuracy of additional sensors used in a drone detection technology platform. DroneTracker fuses all this information and gives a holistic analysis of the surrounding area.

Can radar be used on its own to detect drones?

As radar can detect moving objects, it will pick up on drone activity. However, radar may not be able to differentiate between the types of objects. Dedrone deploys other, passive detection technologies along with radar, including RF/Wi-Fi, cameras, and acoustic sensors to detect drones. Each technology can stand alone and feed information to Dedrone’s DroneTracker software to make a positive identification of a drone.

A multi-sensor approach is the best solution to ensure the accurate identification of a drone. When DroneTracker is integrated, information from radar can help inform with greater distance and accuracy if a moving object is a drone or otherwise.

Is radar an active or passive sensor? What’s the difference?

Radar is an active sensor, as it transmits, or sends out signals, to detect a drone. Passive sensors, such as radio receivers, acoustic sensors (microphones) and optical sensors (cameras) only “listen” to information, rather than send out information. See more on the differences, here.

Who is allowed to use radar?

The use of radar in most countries is government regulated. In the United States, using a radar system without an authorization may result in criminal and civil penalties. However, the FCC provides multiple opportunities for radar operators to get a license to use the technology. For example, airports use radar to monitor air traffic, and have different authorizations for use than sports organizations who use radar to measure speed and distance of a pitch or throw.